I'm helping to raise awareness about ALS, Lou Gehrig's Disease. An incurable disease that affects nerve cells in the brain and spinal cord. Why not join in and do your own ice bucket challenge. To learn more about ALS please visit http://www.alsa.org/about-als/what-is-als.html
Visit my dad' channel to learn more about IBD and being vegan http://www.veganostomy.ca/
Posted by Unknown at 20:01 No comments: 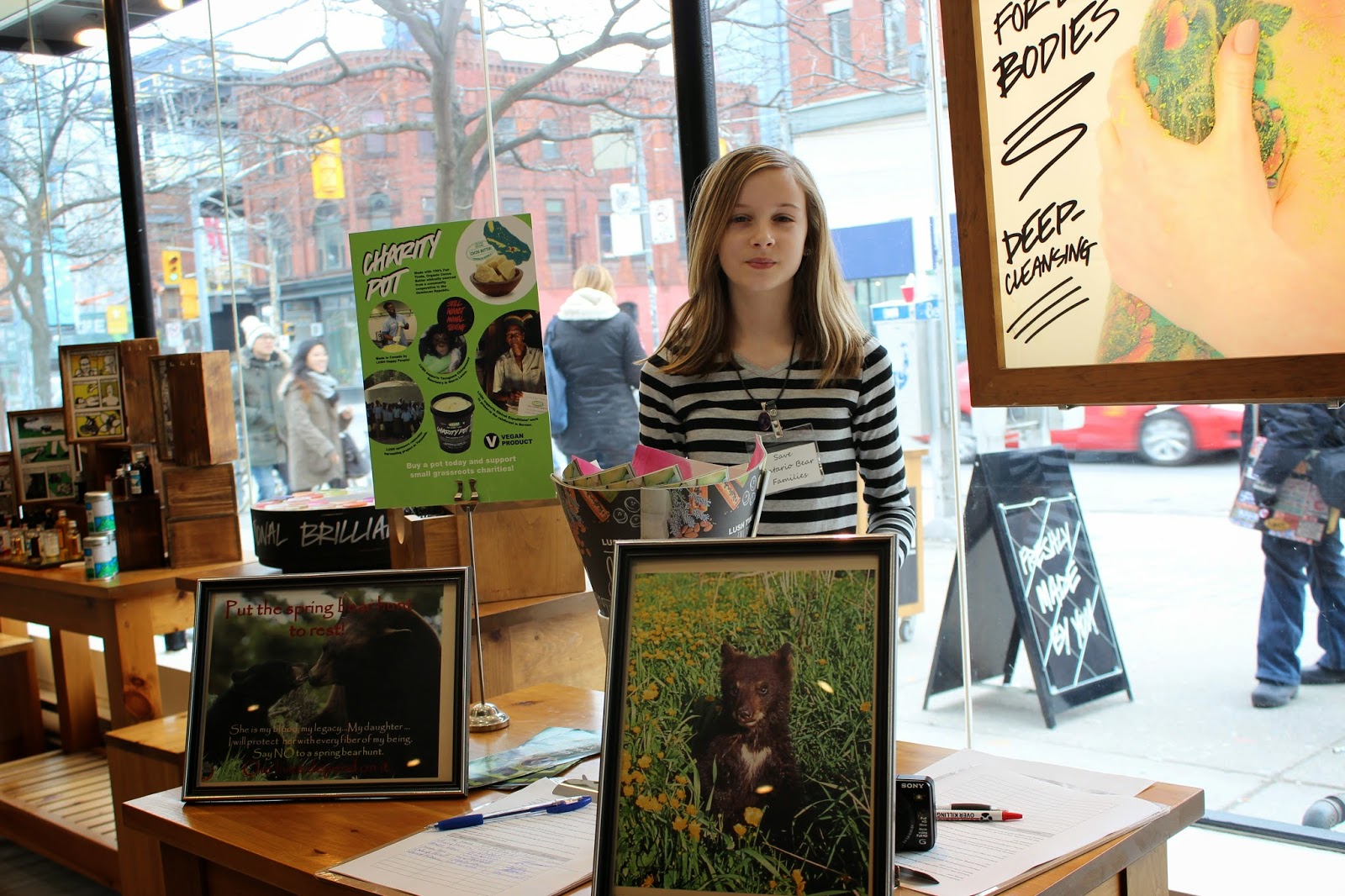 Keeping families together was the theme for our March 1st, 2014 signature blast against the spring bear hunt at LUSH Cosmetics Toronto - Queen  Street. Inspired by Mike McIntosh from Bear with Us and Liz White from Animal Alliance. Who are working very hard to put a stop to this unnecessary and cruel hunt.
Toronto's animal lovers came together to show they do not support this hunt by adding their signature to a petition that would be  presented to Ontario's legislation as a legal document.  I organized  this event that was supported and attended by many.
Thanks to all that came to help we collected over 800 signatures against the Liberal party's implementation of this barbaric hunt. Special thank you to LUSH and everyone who helped us reach this amazing number. We had a great day!
To learn more about these gentle creatures, please visit http://bearwithus.org/ 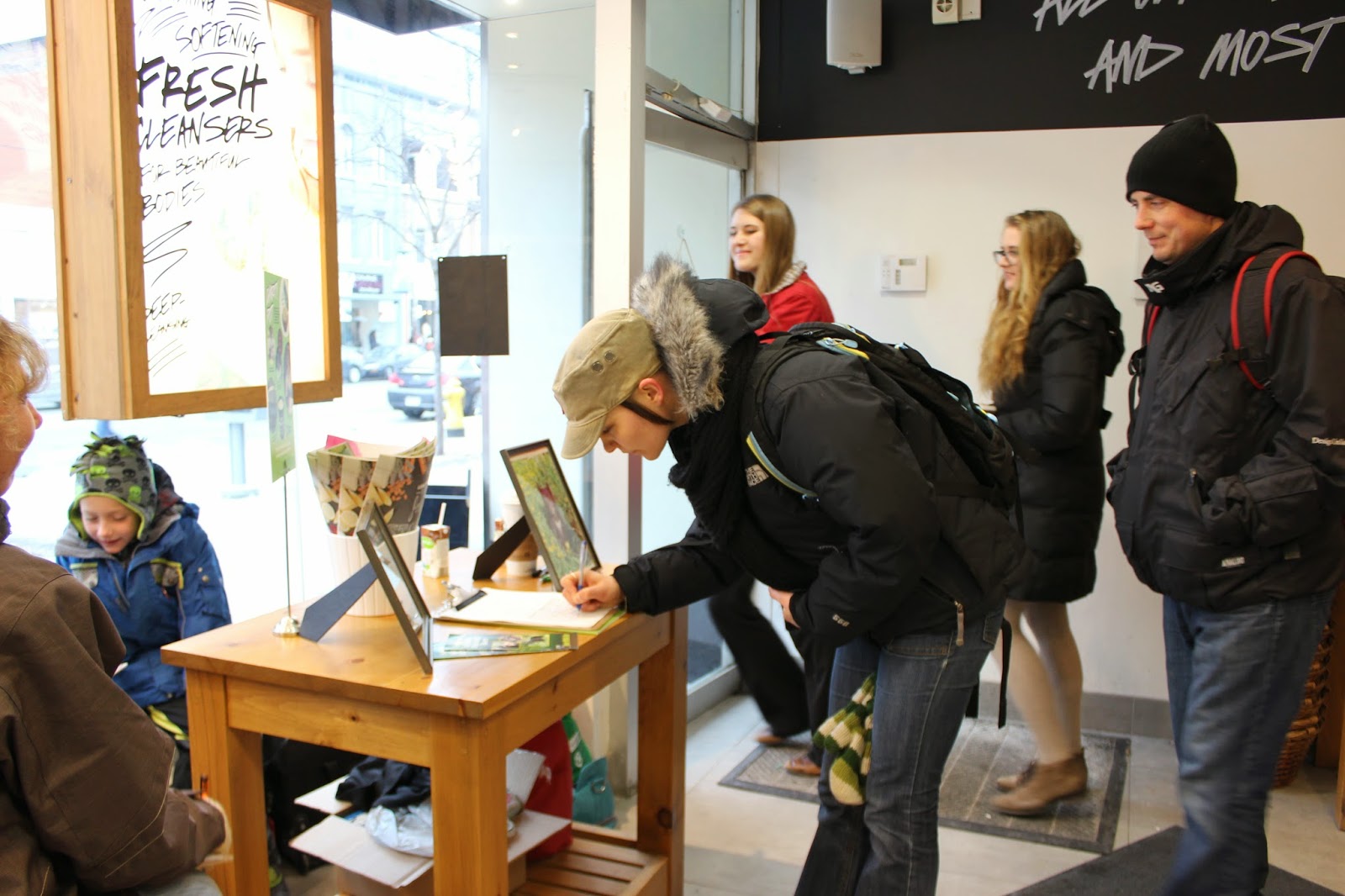 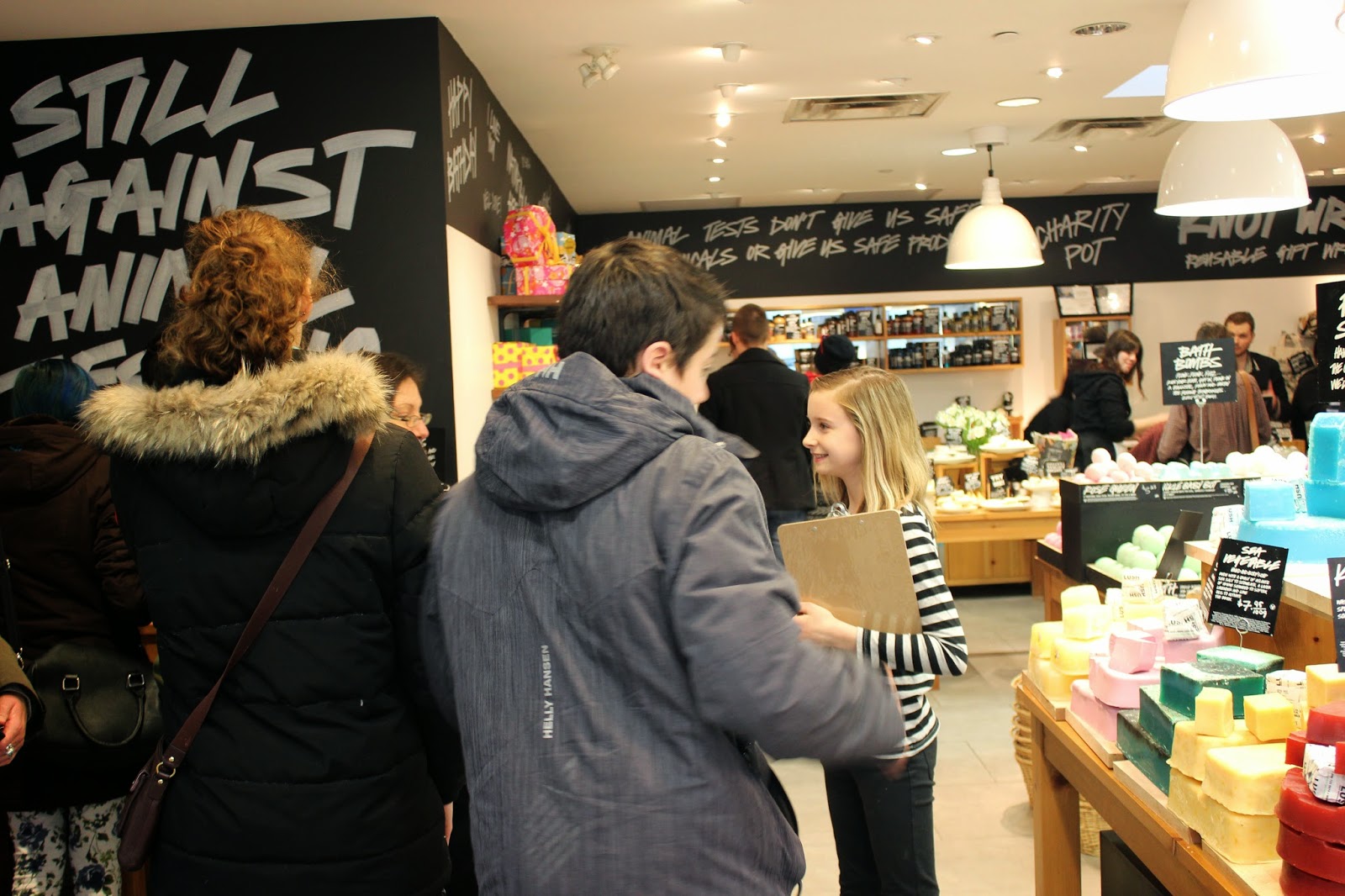 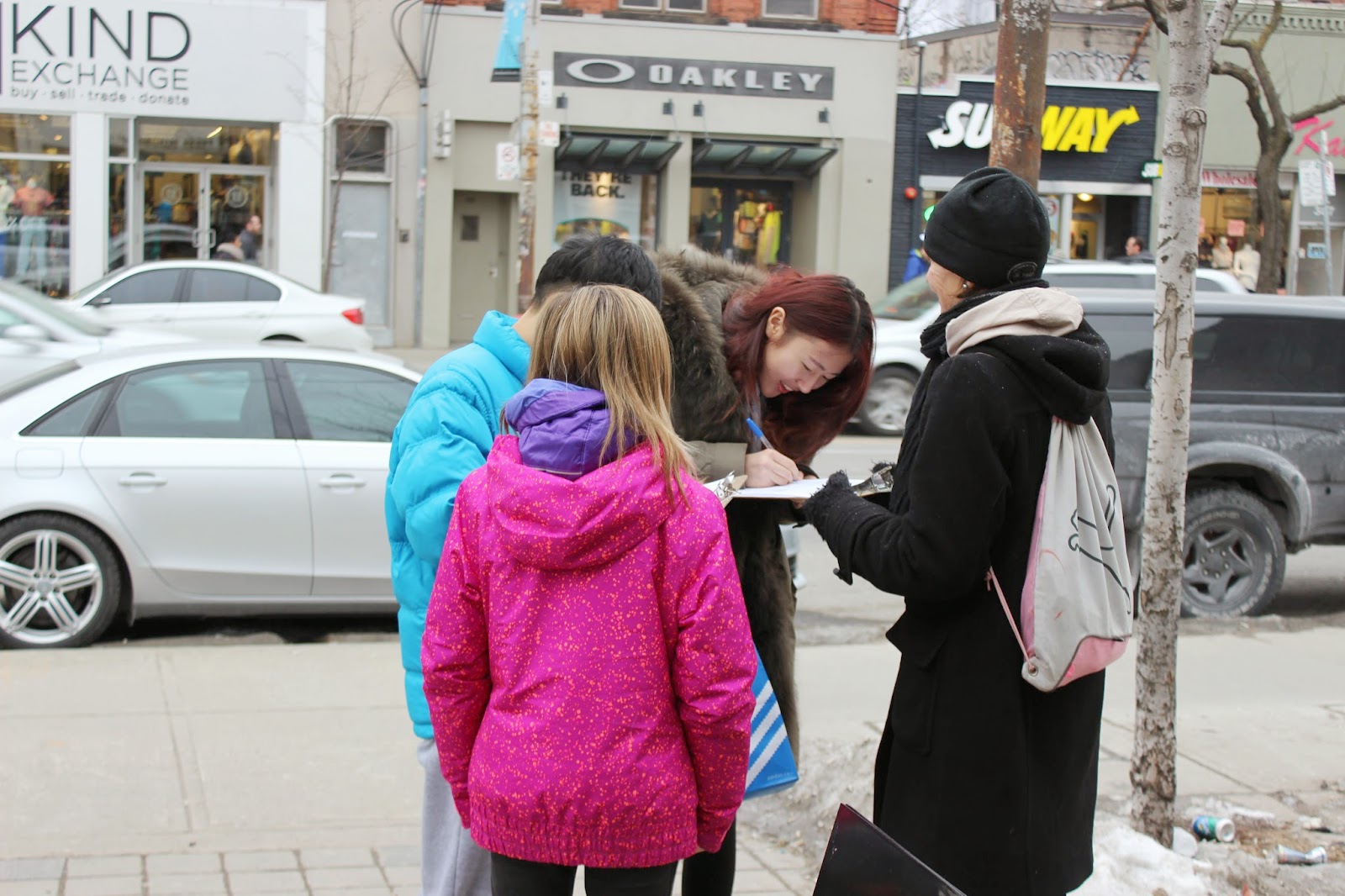 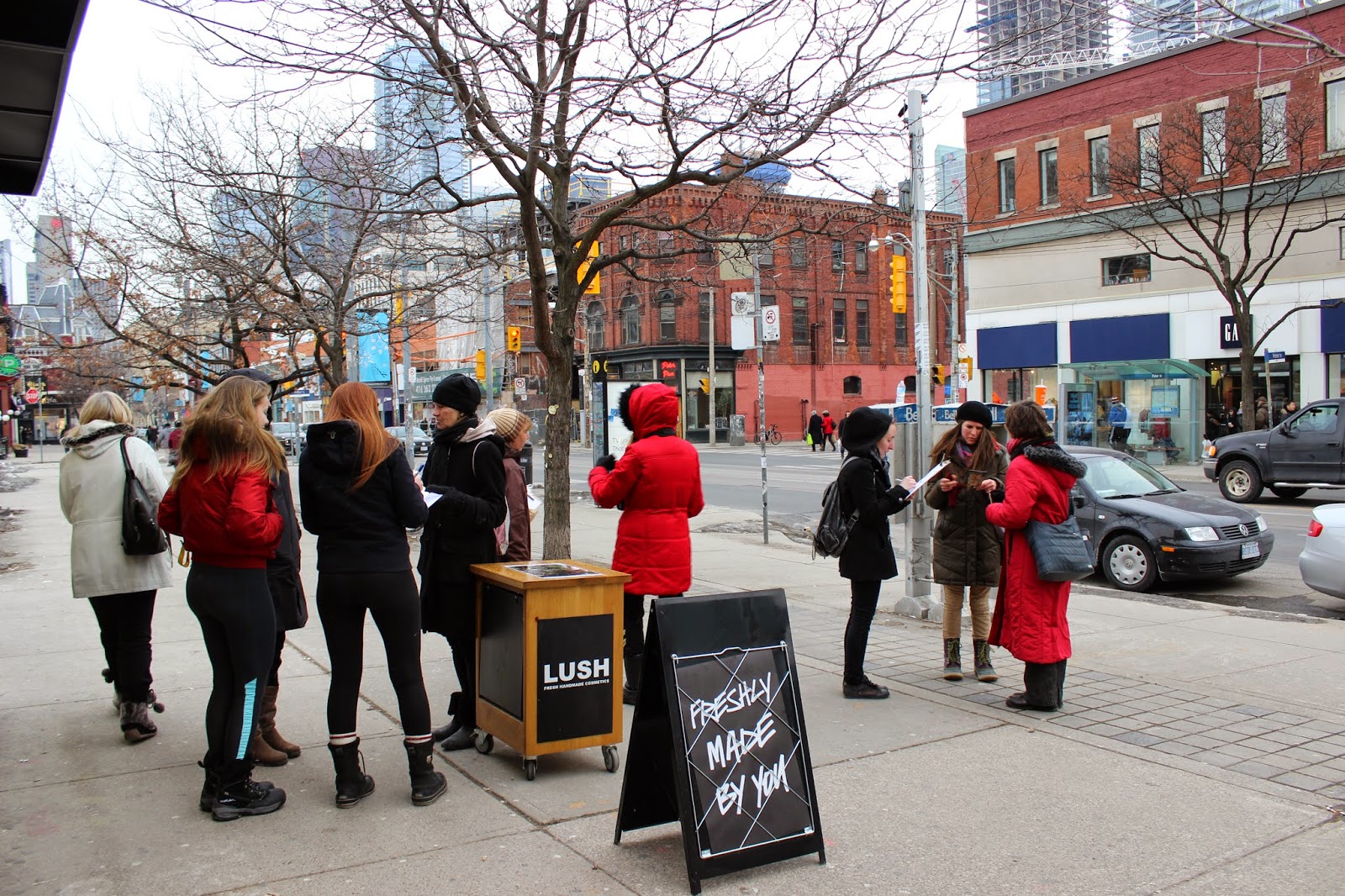 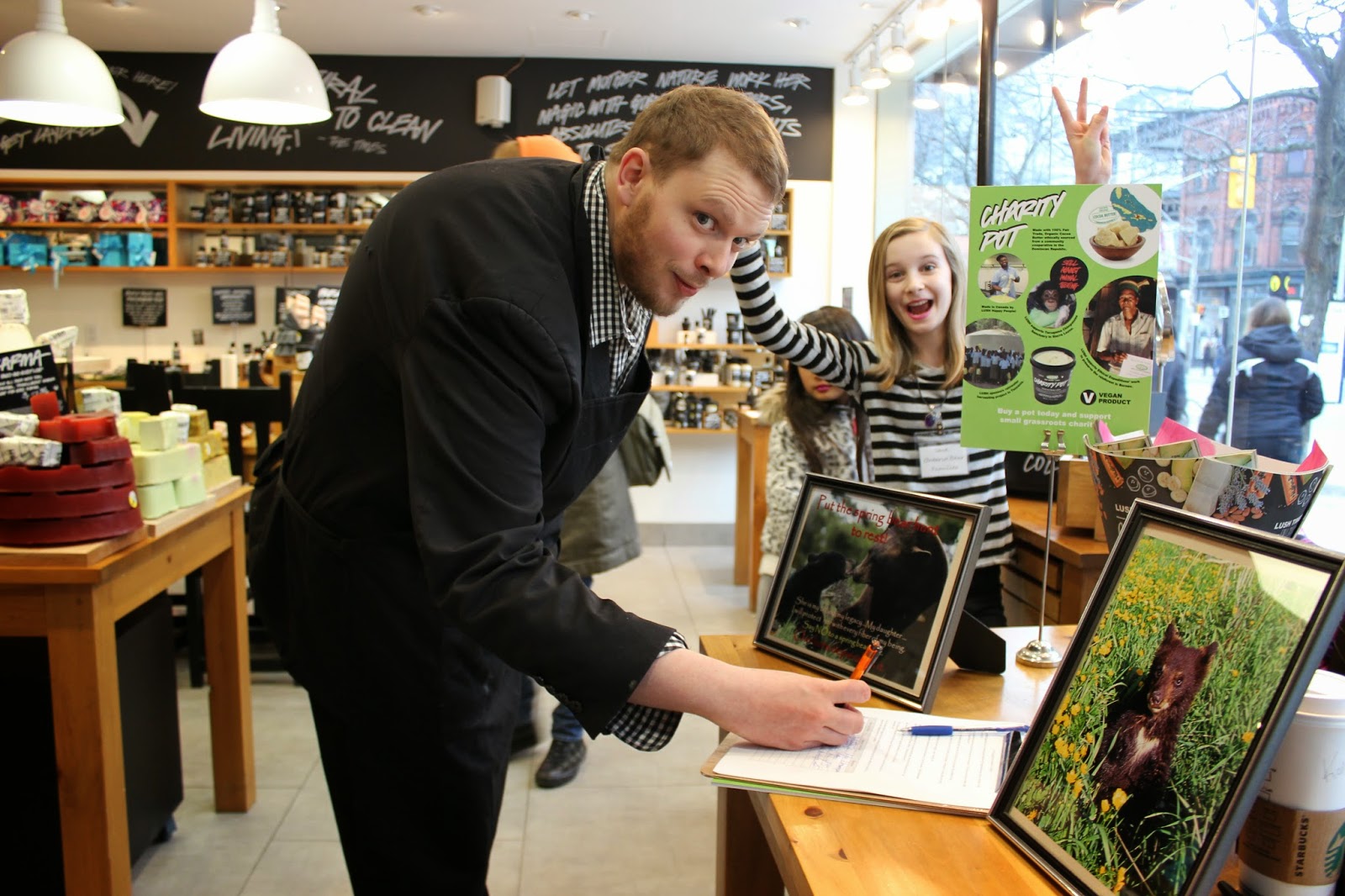 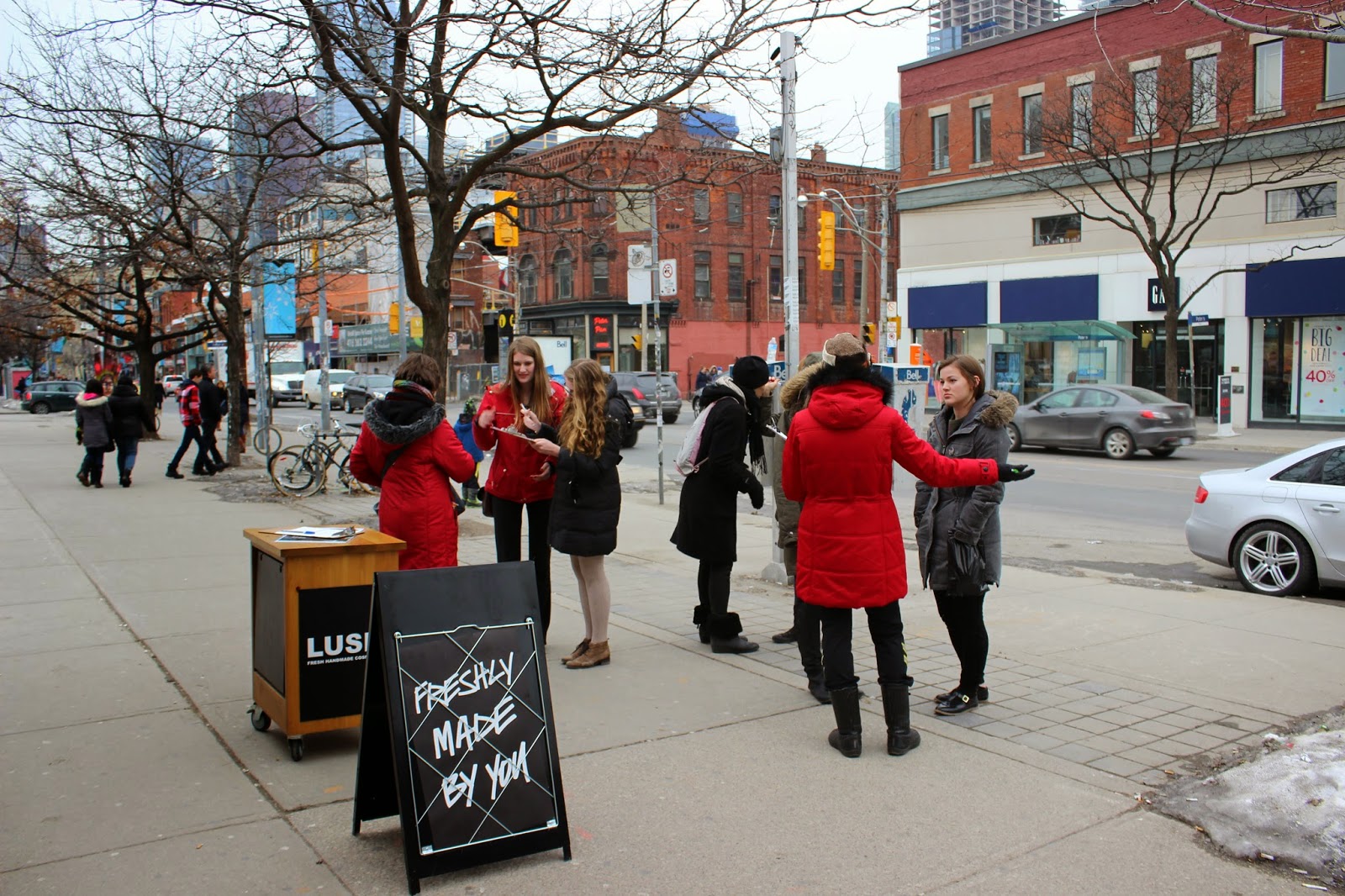 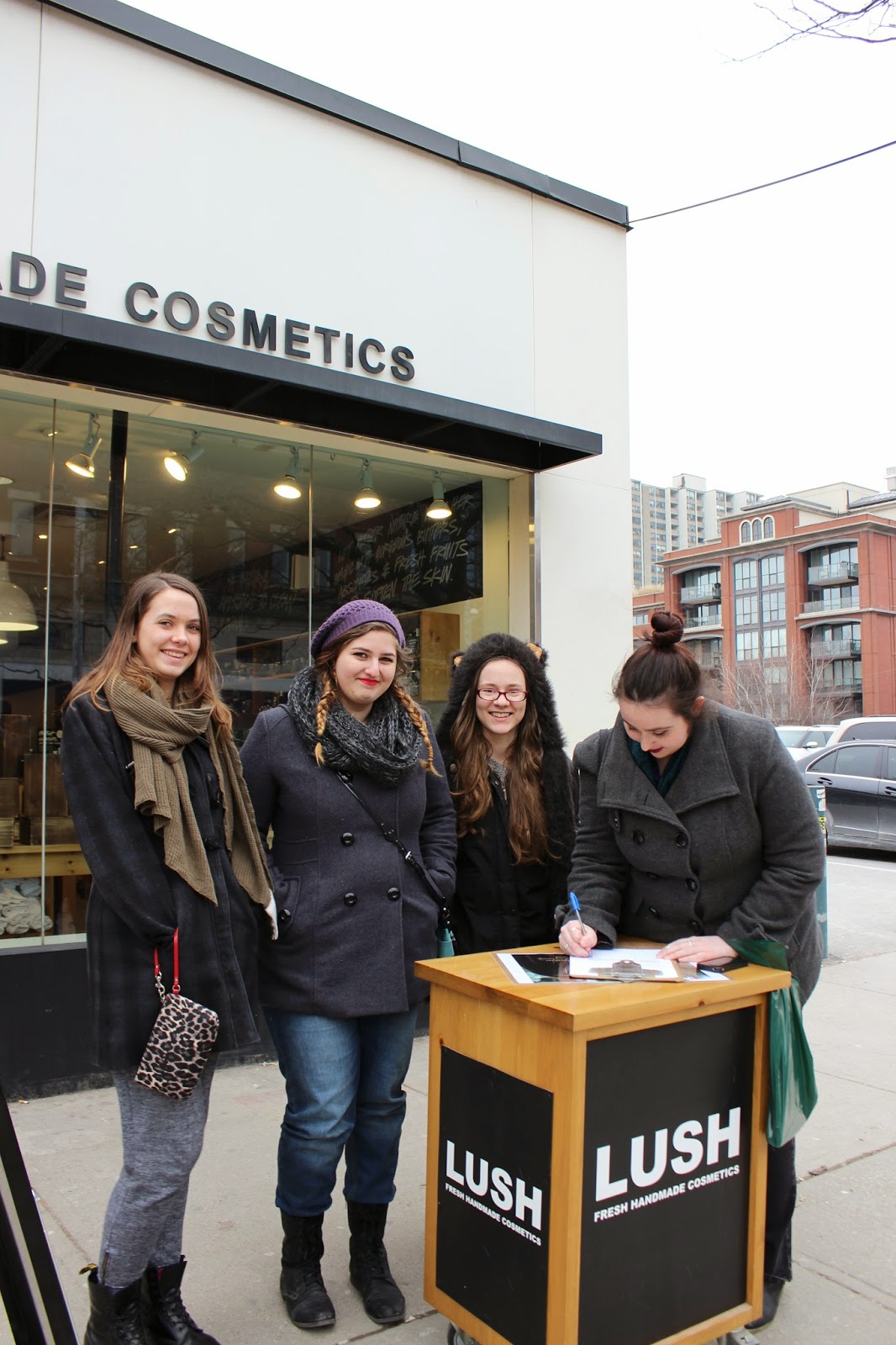 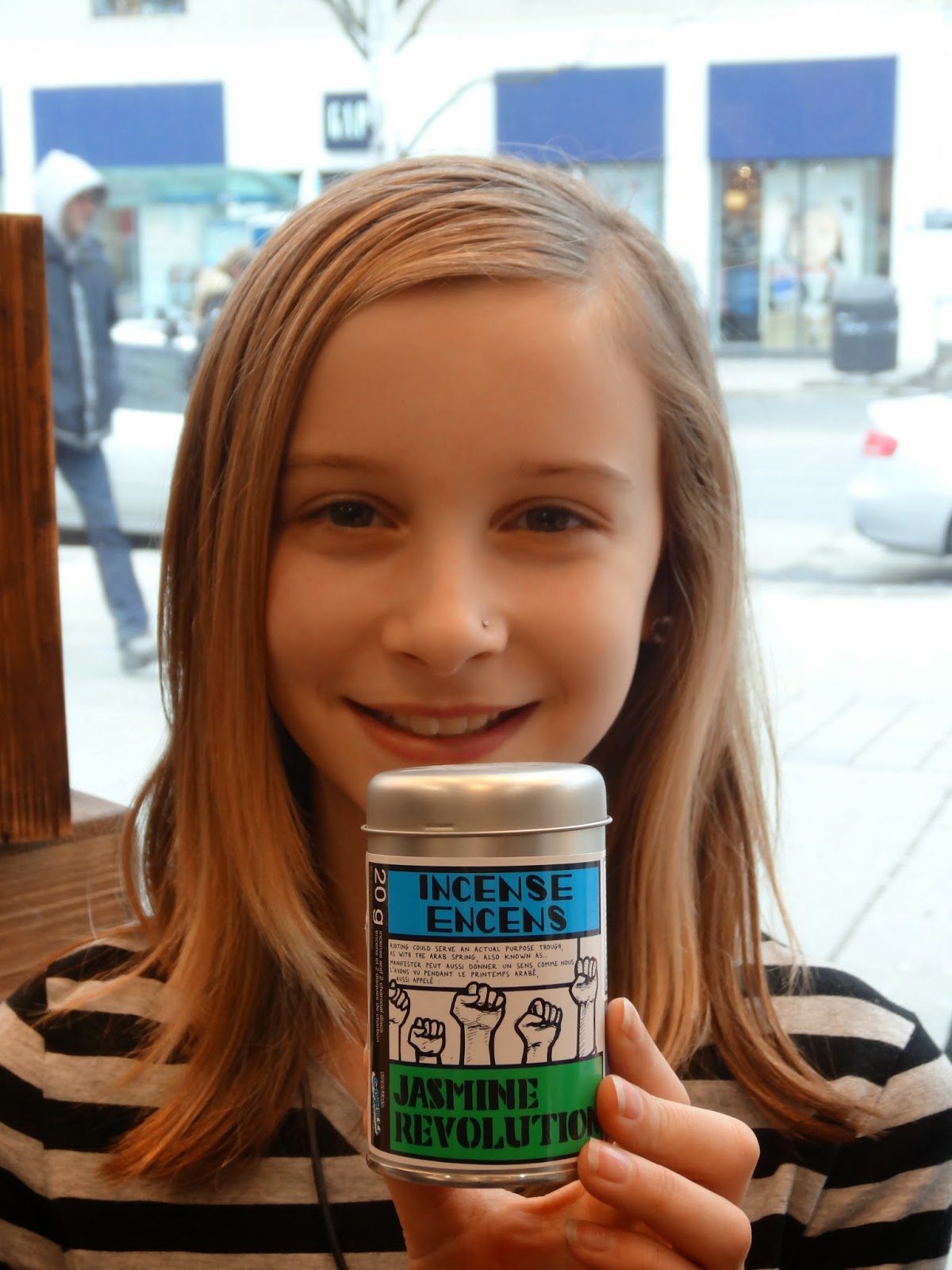 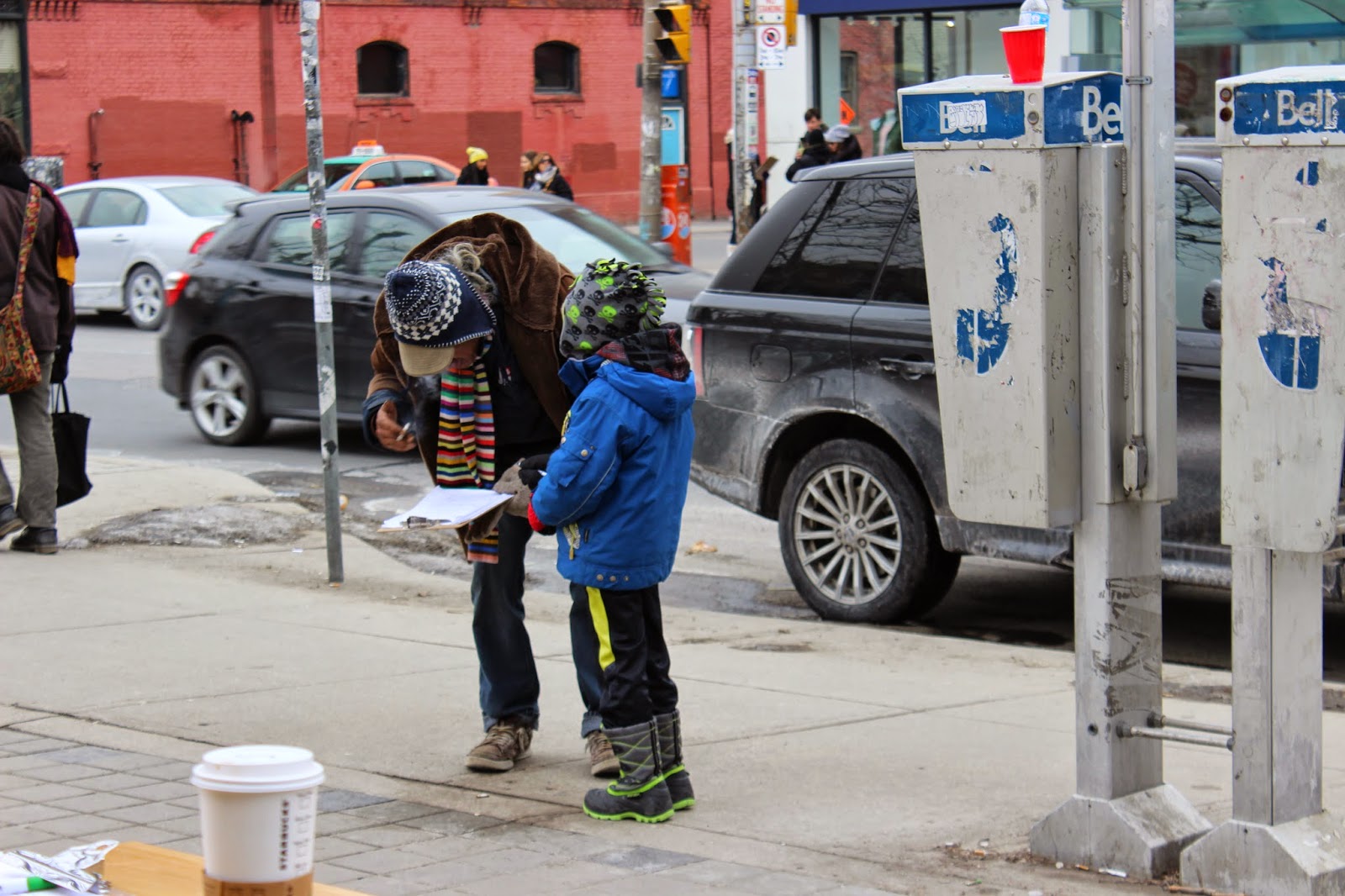 Wall to wall fur trim outerwear. That's what I saw while checking stores on Queen Street West in Toronto. One particular store had a large silver sign proudly displayed outside their store that read "Canada Goose Room." I decided to check out this "room." I was overwhelmed with the smell of death in the air from all the coyote pelts, fashioned on hundreds of Canada Goose Jackets. Being in that room, and seeing so much death strengthened my desire to find out if people new what they were buying when they purchased any brand of outerwear that had fur trim.  I wanted to know if consumers were okay with the fact that animals were inhumanely killed for a fashion trend. 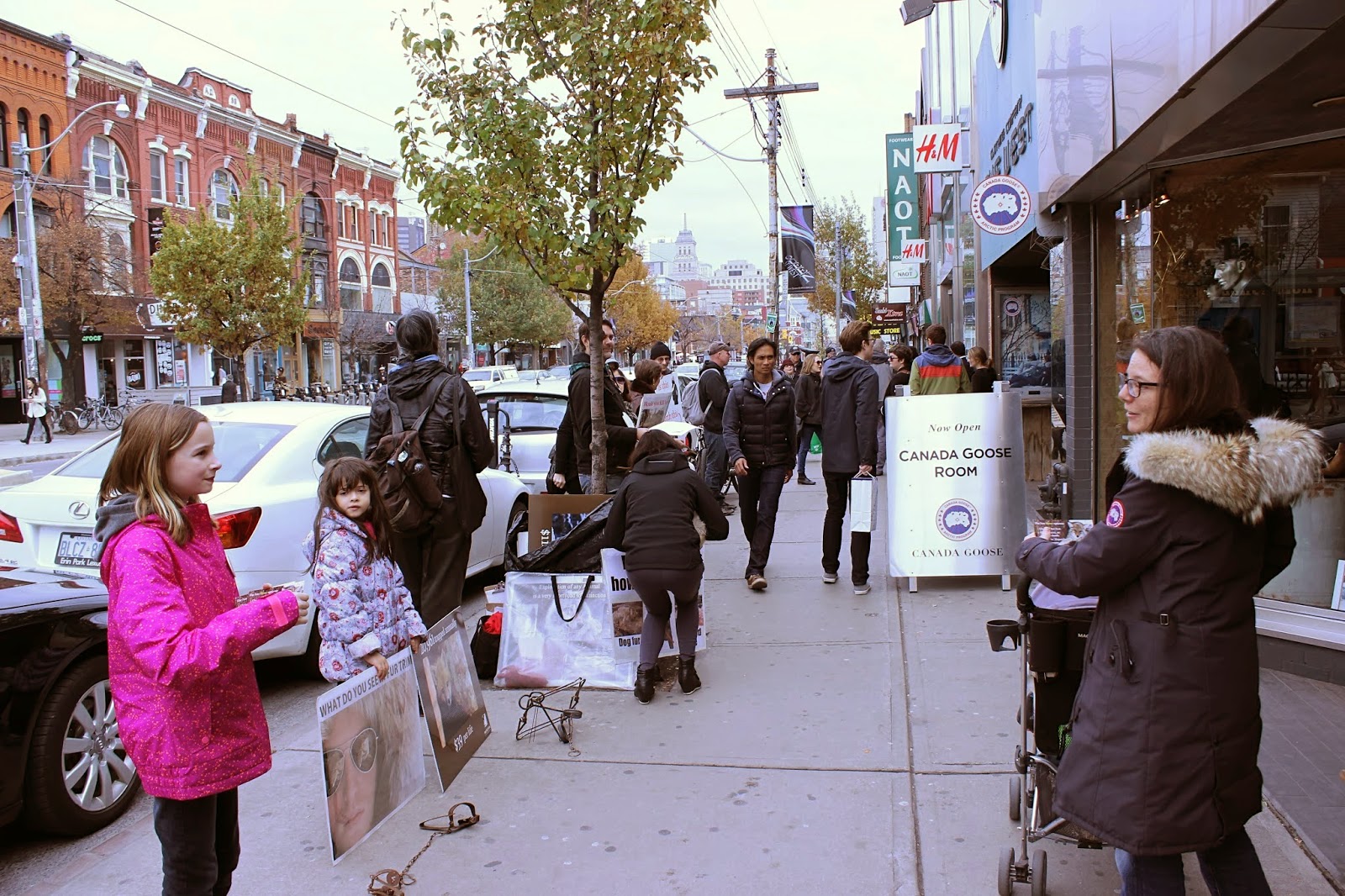 We set up our demo in front of the store, Bragging about the Canada Goose Room, and began a 10 week campaign aimed at educating the consumer, as well as educating ourselves about why the streets are filled with fur trim winter wear.
We found that what most consumers didn't know is that body gripping traps are still legal in Canada and that companies like Canada Goose use coyote trim which comes from animals being imprisoned and killed in leg hold traps. Traps that have been banned in many countries around the world, but not ours.

As I spoke to more and more people, it felt like consumers were also falling into a trap by an industry that says trapping is part of "conservation", calling fur "green", "biodegradable" ," and saying leg hold traps are "humane."Terms like this are unregulated, and are freely used by the greedy fur industry to get people to buy into the fur trim fashion trend. Some people who stopped to speak to us, who wore the Canada Goose jacket, were in tears after learning the truth about what happens to animals used for fur. 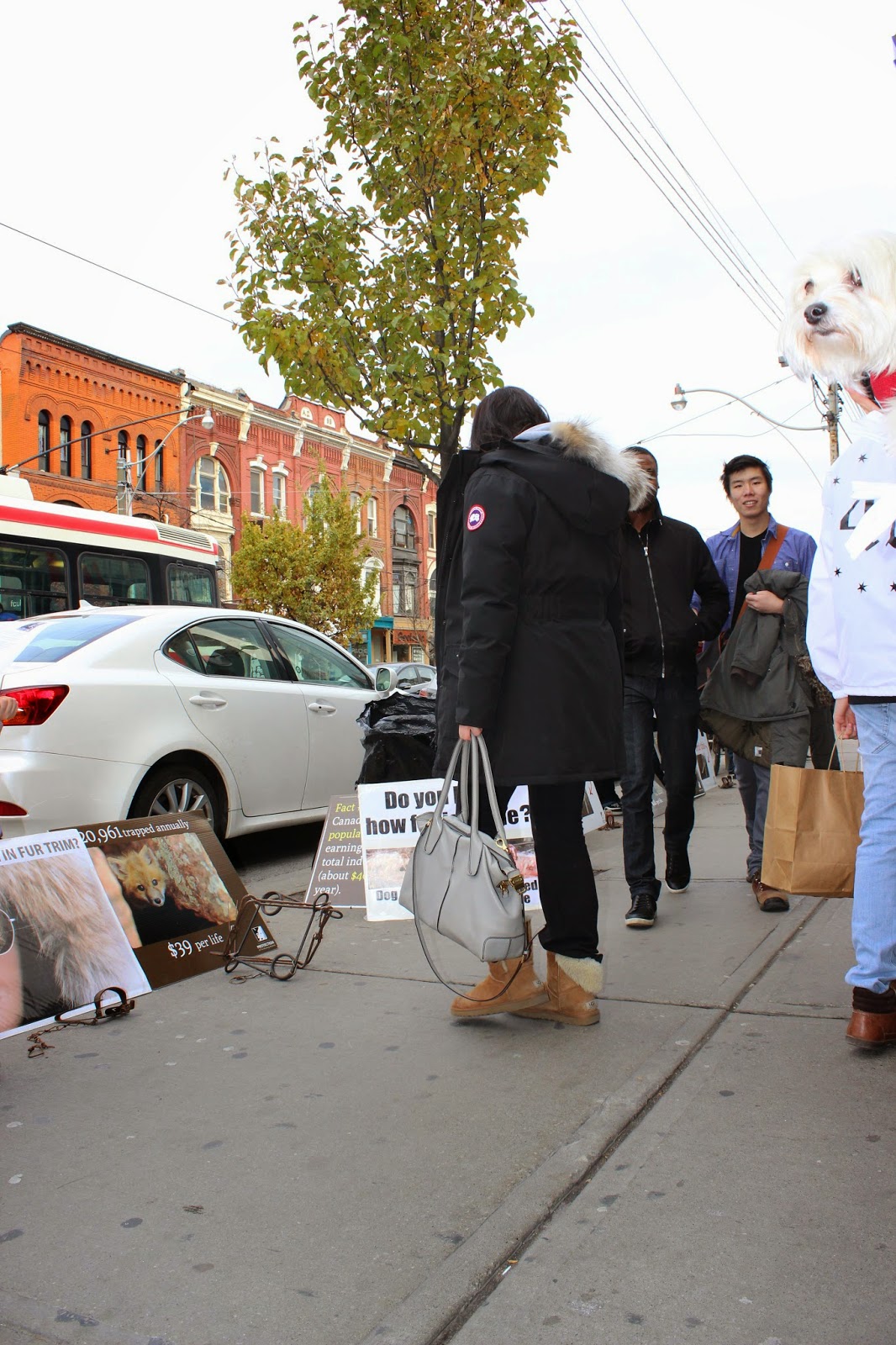 We had a great deal of support from animal advocates who helped us educate people by holding signs or speaking to people passing by. Some consumers who purchased fur trim outerwear from the store returned their jackets after getting the facts from us. Others decided against buying jackets with fur. Instead they went to stores we recommended that have fur free policies. Many people stopped to thank us for being there. Some even picked up a sign or leaflet and joined us. We got hugs and thanks from people grateful we were there, and of course remarks from people not happy to see us. Because some people aren't able to handle that they've been lied to and are not ready to hear the truth.
Through the rain, snow and bitter cold the 10 week campaign was a huge success. We learned a great deal and educated a lot of people about trapping and the fur industry. 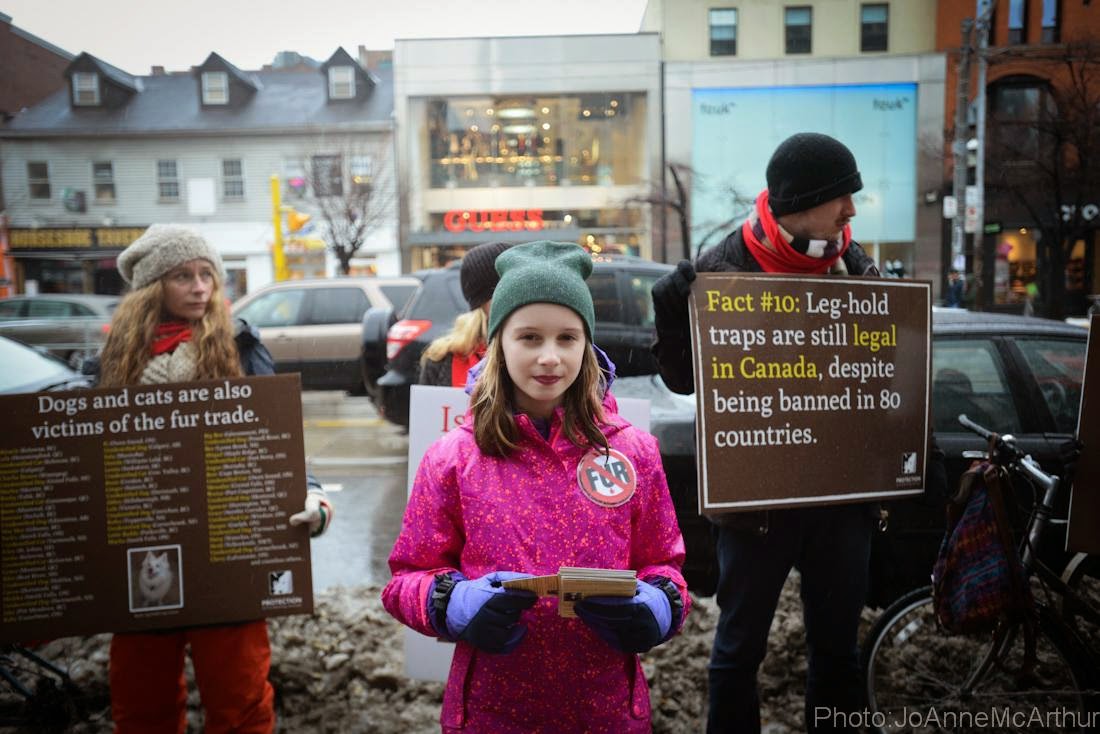 We ended the campaign with a huge vigil for all fur bearing animals that have been killed for fashion. Queen Street was lined with over 70 people who took part in the 3 hour vigil. It was a very cold and rainy day but amazing people came out to stand together.It was quite a sight, to say the least. 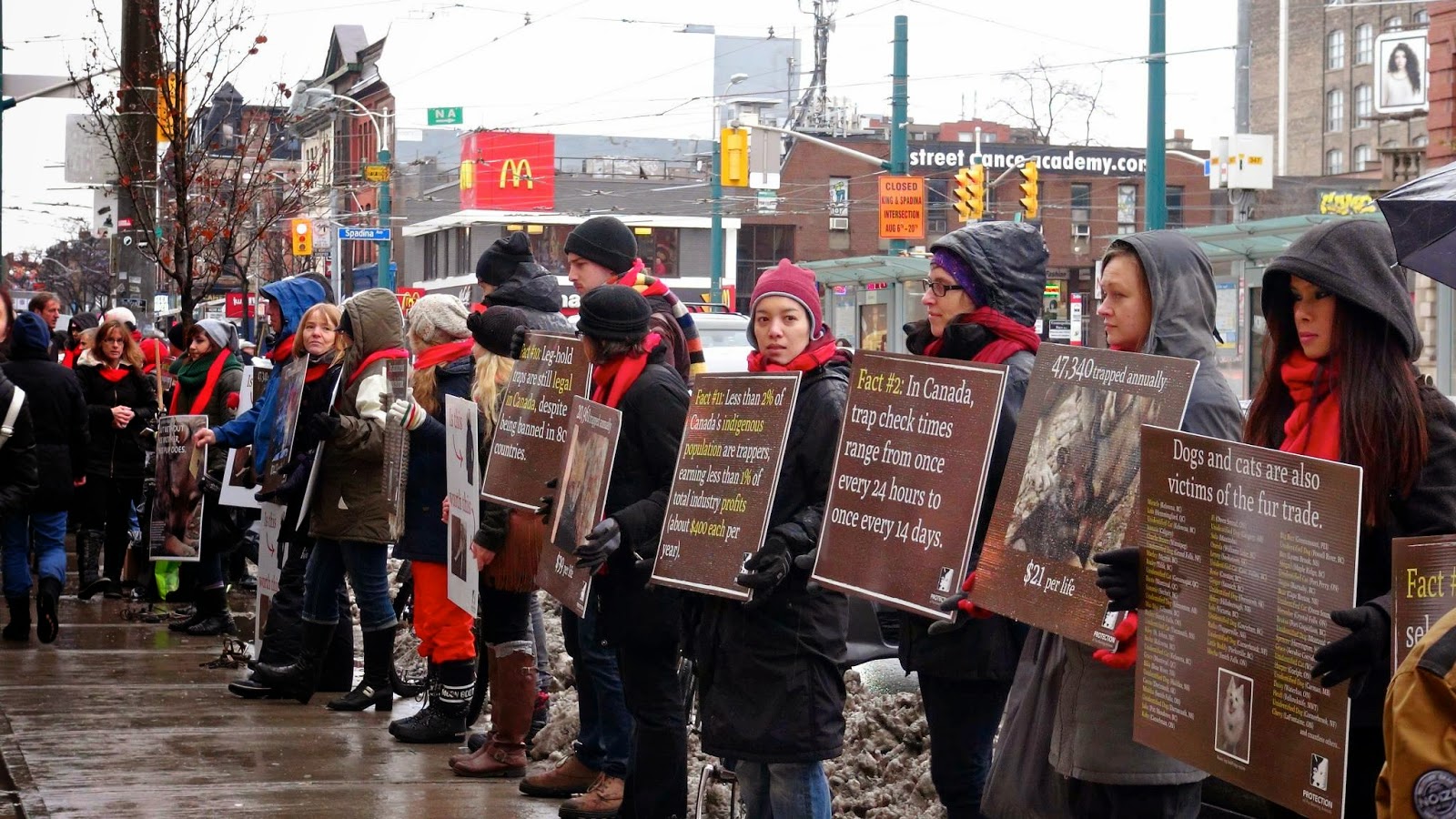 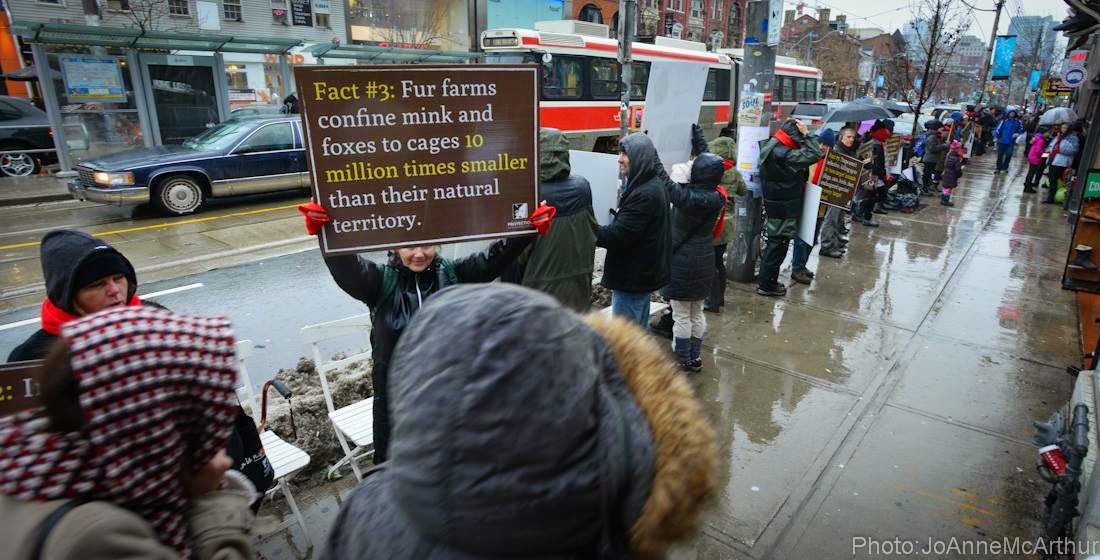 If a coyote trapped you

How would you feel if a coyote trapped you?
bopped you, stomped you, and choked you too.
you now lay in fear, cold and hungry you wait
confused and alone you suffer in grim fate
you try and try to break free as you bleed
until your skin they take, as they hear you plead
Never will you see your loving family again
never will you feel the comfort of your warm den
So next time you want to wear someone's fur
and you find yourself caught by a trendy lure
ask yourself one simple thing before you do
How would you feel if a coyote trapped you! 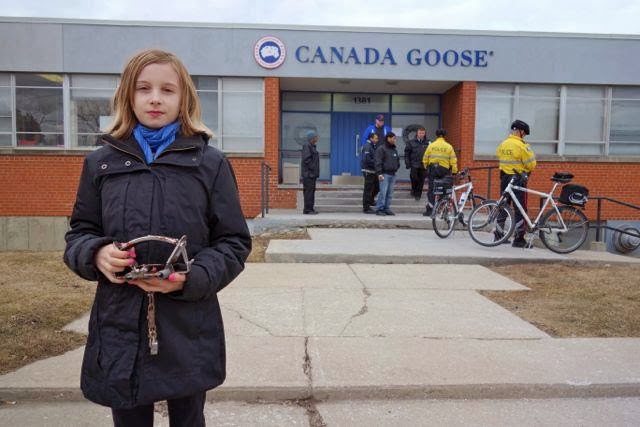 Defender Radio is on the air! Check out the link below and have a listen to me being interviewed by Michael Howie, an award winning journalist.  My interview begins at 24:50m.  Though I encourage you to listen to all of the interviews.  One of my heroes is there as well, Jo-Anne McArthur!


http://www.furbearerdefenders.com/blogs/defender-radio/383-episode-101-defender-radio
Posted by Unknown at 08:16 No comments:

Ontario wants to teach us how to kill!

Our Ontario government thinks it's ok for youth ages 12-16 to use traps to kill our wildlife.  Below is a letter I sent to my MPP, Mr. Ouellette and Minister of Natural Resources David Orazietti.  I am still waiting for their reply.  Please write David Ouellette to let him know we don't want to learn how to kill.

My name is Jasmine Polsinelli, and I am 11 years old. I am writing to you to express my disappointment with the newly introduced youth trapping program in Ontario. As a young person, I do not understand why the Ontario government is trying to teach young people like me how to kill another animal, and that killing is okay. Even at my age I understand how valuable and precious life is. Why try to teach young people otherwise?
Trapping is inhumane and causes a great deal of suffering to the animal. But putting a trap in the hands of a young person, and allowing them to take the life of a living creature is simply wrong, and outdated. We see so much violence in the world. Do you really think we need a program that teaches us further disrespect for the living? It doesn't matter what you want to call it, "conservation", "heritage", "hobby" - I would never even think about trapping and skinning an innocent animal.

I think I speak for the majority of young people in Ontario when I say: we want to learn how to live, not how to make others die. I am asking the Ontario government to reconsider their support for this program, and instead involve youth in a non-violent program that teaches us to respect and preserve our wilderness.


My petition to Dani Reiss of Canada Goose. http://www.change.org/en-CA/petitions/mr-dani-reiss-ceo-of-canada-goose-meet-with-11-year-old-jasmine-to-discuss-alternatives-to-coyote-fur
To find out more about trapping go here- http://furbearerdefenders.com/fur/trapping/about-trapping
To find out how we can co-exist with coyotes go here- http://www.coyotewatchcanada.com
To write David Ouellette email- dorazietti.mpp@liberal.ola.org
To find your MPP go here- http://www.ontla.on.ca/web/members/members_current.do